What Is A Power Stroker In Bowling

In bowling there are four main styles that define a player’s release. They are stroker, tweener, power stroker, and cranker. In this 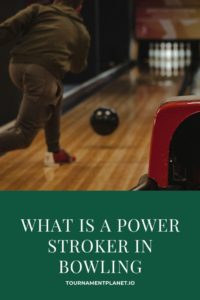 article we’ll focus on the power stroker style and how it may be the best style all around.

As a quick recap, a stroker is a player who has great form and consistency in their release. They also typically have a low rev rate under 300 rpm. A cranker is the opposite. They are all about power and high rev rate. They have a heavy twisting of their wrist at release that generates more than 370 rpm on the ball. A tweener is someone with rev rates between 300 – 370 rpm. They have some of the consistency of a stroker and the power of a cranker. However, they typically are a little bit “dirty” in their form. This is where the power stroker comes into play.

The power stroker is like a tweener in that their rev rate is between 300 and 370 rpm. However, they tend to have a smoother style. Picture a higher backswing and heavier use of the shoulders to generate ball rotation.

What Kind Of Ball Does the Power Stroker Use

Because the this release style has a fairly high rev rate players of this style don’t need as much grip to generate hook compared to their stroker counterparts. In our article How To Find The Best Bowling Ball For Hook we talked about differential and how this plays a role in hook. Someone with a high rev rate can get away with a medium differential. This would be somewhere between 0.027 – 0.048 which we have normalized to be between 4 – 7 on a 1 – 10 scale for simplicity.

This play style can work well with either a symmetrical or asymmetrical core as well. The asymmetrical will give more hook on the backend so it really depends on your release and rev rate which core would be best for you. Also, it’s important to choose the right weight with this style of release. We’ve already discussed weight, but in a nutshell, a lighter ball will allow you more control and power at the pins as long as you don’t go too crazy.

One of the most famous power strokers is Peter Weber. If you want to see some highlights of his play and maybe learn from his style check this out:

Also, you’ll find that a lot of power stroker players use a wrist positioner to assist in getting just the right timing with every throw. If you’re still working on a consistent throw, or even if you’ve got it down, a positioner can be a useful aid.

Did you learn anything about power strokers that you didn’t know? Did we leave anything out? Do you know anyone with this play style? Let us know in the comments below.