What Is A Cranker 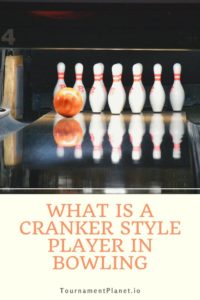 What is the in the mind of a cranker style player? Power, more power! That’s the philosophy that drives these players in bowling. These are the guys with insane hook in their throws. A cranker is generally accepted to be anyone with rev rates over 370 rpm. This in it’s own right is an impressive feat for sure. We’ve already discussed the more accurate and slower stroker style which is below 300 rpm. Cranker is the opposite – power and less accuracy.

You can spot a cranker on the lane by their power and unfortunately because of the lack of consistency in their throws.This is because everything in life comes with balance. Bowling throw style is no different. These powerful players sacrifice control and reproducibility in their throws in exchange for power. So what’s the deal with cranker style? Is it the best style? Let’s dive a little deeper and while we’re at it we’ll uncover the best bowling balls for cranker style bowlers.

The great thing about the cranker style is it’s very efficient for knocking down pins. If thrown correctly, the high rev rate combined with a nice late hook, delivers a powerful blow to the pocket. However, as mentioned before this is harder to execute due to the tradeoff of accuracy in this play style. But don’t worry, the extra energy unleashed by most crankers sends enough energy to the pocket to compensate for a less than perfect release.

Speaking of release, what does a cranker release look like. Typically, crankers have a late release timed almost with the dropping of the foot at the foul line. You’ll sometimes hear crankers referred to as drop and release as a result. But this is not a direct correlation. Some crankers still slide but almost all have an extended elbow to help with the final wrist twist. Because of the strain on the wrist it is important for cranker style bowlers to use wrist protection.

What Are The Best Bowling Balls For Crankers

Since cranker style players use a higher rev rate to deliver the ball to the pocket they can rely less on high grip properties of the ball. In our other article “The Science Of How To Find The Best Bowling Ball For Hook” we discussed differential. Crankers don’t need to have a high differential. Depending on oil conditions a cranker can get away with low to medium differential. This would be between 0.01 to 0.032 which converts to between a 1 or 5 on a 1-10 scale.

In regards to coverstock you won’t need to go all out with a particle ball. Being a cranker style player can actually save you money in this regard. Most cranker players will do fine with a solid urethane ball. And you can probably do nicely with a symmetrical core because you don’t need that kick at the back end like you would see with an asymmetrical core. Having said that, depending on your power, rev rate, and style the ideal ball for your particular cranker style may vary.

Here’s a closer look at the this powerful style in action:

Are you a cranker? Do you know any crankers? Do you find that power equals strikes? Let us know in the comments below.