What Is A Stroker 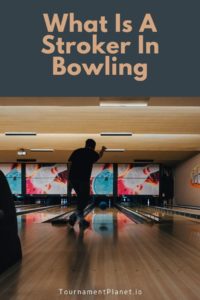 How To Identify A Stroker

A normal right handed stroker will release the ball nearest to the right gutter as compared with the other hook release styles. This might be anywhere from 4-5 boards from the gutter. This is because of the low number of rpms the ball is released with and the anticipated trajectory of the ball. When a stroker bowler throws the ball it will have a very straight trajectory in the front of the lane and then hook late in the back end. Because of the low rpm and the straight trajectory not much change in direction is needed to get the ball into the pocket.

Another common feature of stroker style bowlers is that they have more control. Their throws are more repeatable and consistent. This is because they aren’t exerting as much rotation in the wrist, shoulders, and arm as other players so there is less variation in their rev rates. This is the classic bowling style. The highest number of professional bowlers use this style. A large number of the world’s best players are/were stroker style.

What Are The Best Bowling Balls For Strokers

So what are the best bowling balls for stroker style players? If you have a low rev rate and still want hook then there is a specific set of ball characteristics you’ll want. First, you want a reactive ball. If you can afford it a particle ball is best for stroker style. A strong grip coverstock is key. Because you only have a short window of time to grip the lane and get traction you want the most you can get.

In our other article “The Science Of How To Find The Best Bowling Ball For Hook” we discussed differential. We won’t go into detail but rather give a summary. For stroker players you’ll want a ball with high flare potential. This will be a differential between 0.045 and the maximum of 0.060. If you follow this when selecting a new ball you’ll have a golden throw.

Here’s a closer look at the this deliberate style in action:

So what do you think about the stroker style? Are you a stroker player? What ball do you use? Did we leave anything out? Let us know in the comments.