Well, the time has come. All good things come to an end and weight holes in bowling balls are no difference. In one week on 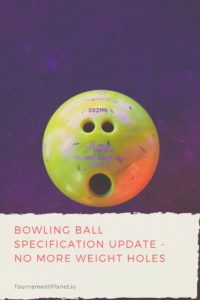 August 1st, 2020 the ability to have weight holes in your ball during USBC sanctioned events will come to an end. This decision was made by the USBC Equipment and Specifications Committee in 2018. So while ample time has been given to get holes plugged it seems many players waited. Now, with Covid we’re finding that it’s hard to comply since most pro shops are closed.

What Is This New Weight Holes Rule

The rule states that Balance Holes, AKA Weight Holes, must be plugged and can no longer be used. Originally, balance holes were drilled to “correct static imbalance in bowling balls”. However, as time went on players realized they could actually change the ball’s movement by drilling balance holes. This in turn, made it easier for bowlers to hook a ball right to the pocket.

The removal of the balance holes isn’t all bad though. According to the USBC:

“By allowing bowling balls (for balls weighing more than 10 pounds) to have up to three ounces of static side, thumb and finger weight – which is up from one ounce – and up to three ounces of top weight, there no longer will be the need for a balance hole to correct static imbalance in the typical ball layout.”

With this in mind, it’s possible to have some customization of your ball.

This Is Not The Only Change

In addition to removing balance holes the USBC is allowing players to drill up to five holes for gripping purposes. Unfortunately, this comes with the stipulation that all gripping holes must be used on every delivery. This is meant to prevent players from drilling “gripping holes” that act as balance holes. By requiring players to use the drilled holes on every throw they are preventing holes being drilled solely for hook potential.

Why The Change – What’s The Deal

According to the USBC this decision was made so that player’s skill is the defining factor in determining a winner. As technology improves and equipment becomes better they want to remove advantages caused purely by equipment. While this sounds noble, it has caused a lot of upset in the community. Having said that, it’s also important to note that most pro players have been complying with the new rule for some time already. These guys have spent the time adapting to the changes in ball requirements. It’s not impossible to do it, it just takes time.

This rule does make some sense though. There is an obvious competitive advantage to players that afford to drill extra holes and it isn’t skill related. Also, this rule requires players to commit to a specific style of release since all their balls will likely have the same number of holes going forward.

The Sport Of Bowling Continues To Evolve

This rule change reminds me of the rule change that went into effect last year that only allowed balls to be cleaned with a dry cloth during competitive play. Previously, we were able to use liquid cleaners or even just water to clean our balls. However, that rule was enacted to prevent equipment manipulation during competitions. So far this rule has been a good change to the sport. It leveled the playing field and requires players to adapt to changes in oil conditions on the lane and on the ball. A true test of a bowler’s skill and adaptability.

Wrap Up And Final Thoughts

The new rule is going into effect August 1, 2020. It requires that balance holes be plugged from balls and only holes for gripping can be drilled. All gripping holes must be used on every throw. The change was made to remove competitive advantages based solely on equipment rather than skill. Two years notice has been given so players have had plenty of time to comply with the change.

What do you think about the new rule? Will it make competition more skill based or is it just another change that inconveniences players? Did you plug your weight holes and if so have you noticed a change in how the ball reacts? Let us know in the comments below.