Bowling Has Its Own Vocabulary

Bowling has a rich history dating all the way back to the Ancient Egyptians. As a result, it has gone through a number of 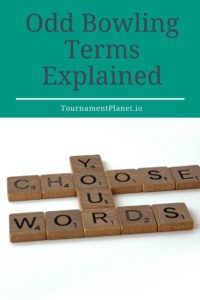 transformations and picked up a few terms along the way. Some of them are obvious, while others are not so much. We’ll take a look at some of the more interesting terms and explain what they mean. So sit back, relax, and enjoy a chicken sandwich – you earned it.

There are a lot of terms in bowling that reference food. Seems like a tasty place to start.

Since we referenced it up top let’s start with this juicy term – hopefully it’s not dry. A chicken sandwich refers to a strike, three spares, and a strike in that order. So you have the strikes as the bread and the three spares in the middle as the chicken. Not the most delicious chicken sandwich on the planet, but still pretty satisfying.

The beer frame is called during team bowling. When every member of the team bowls a strike in the same frame except for one player. This unfortunate player has to buy the round of beer for the rest of the team. Bowling a strike is always exciting, but when you get a beer too it’s even better. If there is going to be a beer frame, it’s best to be on the receiving end.

This is one of those regional bowling terms. I prefer cake shot due to me growing up in the western region of the US. However, back East they call it “Cheesy Cakes”. This is when a lane is really easy to score strikes on. If it’s easy you say, “This is a cake shot!” and then you better strike and not fail.

This is essentially the same as beer frame, but with fries. If you’re hungry go for the fry frame, if thirsty go for the beer frame.

Nowadays, this refers to bowling four strikes in a row. Prior to the year 2000, it referred to bowling two in a row.

Now I know what you’re thinking. A six pack is what you get at the store for a lonely night in. Wrong! A six pack in bowling is when you make six consecutive strikes in a single game. This means it can’t be the last three in one game and the first three in the next. You’re scores is gonna be pretty good after hitting this. The lowest score a six pack can be worth is 150 this would be when you bowl it at the end of the game. The most would be 165 which would be 6 strikes followed by a spare. That’s pretty good stuff.

Turkey is more than just a delicious Thanksgiving tradition. It’s also the great achievement of rolling three strikes in a row. Not as cool as a six pack, but still respectable. The fewest points a turkey is worth is 50 if the final three frames. The most is 65 if you get three strikes followed by a spare.